This entry is our analysis of a study considered particularly relevant to improving outcomes from drug or alcohol interventions in the UK. The original study was not published by Findings; click Title to order a copy. Free reprints may be available from the authors – click prepared e-mail. The summary conveys the findings and views expressed in the study. Below is a commentary from Drug and Alcohol Findings.

de Vocht F., Heron J., Angus C. et al.
Journal of Epidemiology and Community Health: 2016, 70(3), p. 231–237.
Unable to obtain a copy by clicking title? Try asking the author for a reprint by adapting this prepared e-mail or by writing to Dr de Vocht at frank.devocht@bristol.ac.uk. You could also try this alternative source.

For the first time, a study in England has shown that the more strongly a local government area regulates the licensing of alcohol outlets, the greater the reduction in alcohol-related harm within the population, as reflected in the number of hospital admissions.

Summary The economic impact of risky or problem drinking in England is estimated at £21 billion, including a cost of around £3.5 billion to the NHS. Alcohol policy aimed at controlling the price and availability of alcohol, and modifying the drinking environment, can moderate the harms of drinking across the population. In England, alcohol policy is implemented at a local level, resulting in different practices around the country, including (the focus of this paper) local authority control over the availability of alcohol and the drinking culture.

Local authorities can seek to mitigate the negative impact of alcohol on public health through alcohol licensing policy.

The current study evaluated whether the intensity with which local areas enforced licensing, including whether or not they used cumulative impact zones, had an impact on alcohol-related hospital admissions.

Licensing policy is largely determined by the 2003 Licensing Act, which sets out four objectives to be considered in licensing decisions: prevention of crime and disorder; public safety; prevention of public nuisance; and protection of children from harm. Guidance issued in 2005 extended the Licensing Act to give local authorities the discretion to introduce cumulative impact zones in areas where “the cumulative stress caused by existing overprovision of alcohol outlets threatens the licensing objectives”. Within these zones, any outlet applying for a new licence is required to demonstrate how they will avoid threatening the licensing objectives.

The present study evaluated whether the intensity with which local authorities enforced licensing had an impact on population health at a local level. The authors presumed that areas exercising greater scrutiny over licensing (through their use of cumulative impact zones and refusal to grant new licenses) would see a positive impact on population health. To test this hypothesis, they looked at the association between figures on alcohol licensing in lower tier local authorities in England for the years 2007/2008 and 2011/2012, and data on alcohol-related hospital admissions for each quarter from 2009–2015.

The scores of some areas changed year-by-year. To take this into account, annual scores were combined to generate a score of average intensity across the period 2007–2015. Areas were grouped into four categories: inactive (passive), low intensity, medium intensity, and high intensity. At issue was whether areas which had on average a more intensive alcohol policy over the years 2007 to 2015 experienced greater year-by-year reductions in alcohol-related hospital admissions, and by extension, greater reductions in alcohol-related ill-health.

Impact on population health: The authors applied a narrow definition of alcohol-related hospital admissions, counting only those admissions where the primary diagnosis was alcohol-related, for example alcohol liver disease, ethanol poisoning, malignant neoplasms of the oesophagus and hypertensive diseases. This was opposed to a broader definition which could have counted every admission where one of the diagnoses was for a condition at least partially attributable to alcohol. 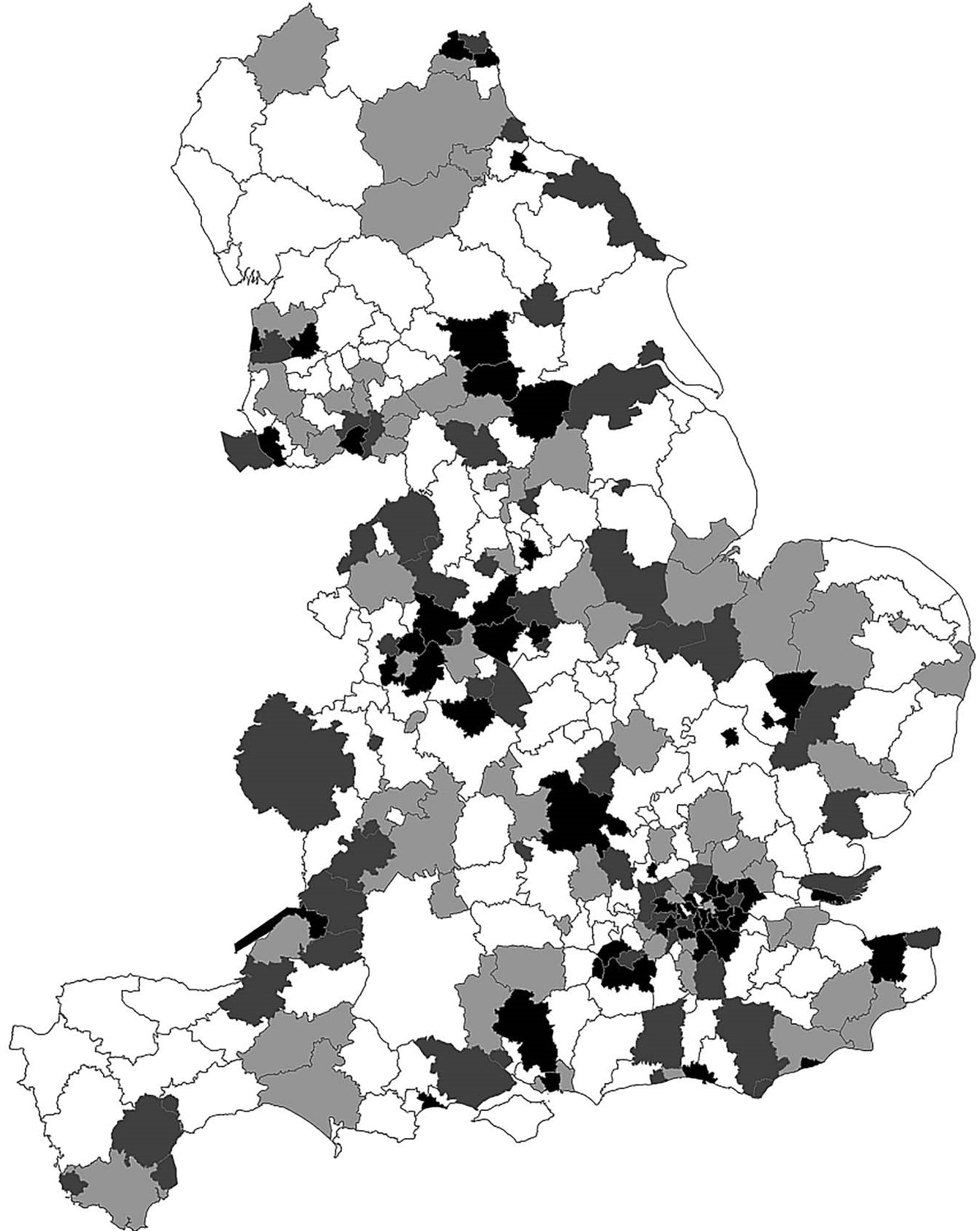 Datasets were available for 319 lower tier local authorities, out of a possible 326. Of these, 37% had an active alcohol policy in 2007/2008, and 7% reported an active policy for new premises plus the use of cumulative impact zones.

Overall, reductions in alcohol-related admission rates were greater in areas with a more intensive alcohol licensing policy. Most notably, compared to estimates based on areas with inactive policies, those with the most intensive licensing policies recorded a 2% greater annual reduction in alcohol-related hospital admissions, a statistically significant difference. Cumulative impacts meant that in 2015 these areas had 5% fewer admissions than inactive areas. There was also a corresponding annual reduction of 0.6% in areas with medium intensity policies, but this did not meet conventional criteria for statistical significance, so may have been a chance finding.

Levels of deprivation, population size and alcohol-related crime rates explained about 50% of the variability in hospital admission rates between lower tier local authorities at the start of the study. There was no evidence that differences in these characteristics could explain changes in admission rates over the 2009–2015 time period.

This paper adds to evidence about the effectiveness of population-level alcohol licensing policies in England, suggesting that the more intense the licensing policies, the greater the reductions in alcohol-related hospital admissions. The authors concluded, “this may be direct causation of the policies themselves or it could be an indirect association, but in either case, these analyses suggest a longer lasting population health benefit of local government initiatives to restrict alcohol licences”.

The researchers could not conclude that the policies definitely caused reductions in admission rates because, although larger reductions were observed in the areas classified as having the highest cumulative policy (indicating a ‘dose–response’ relationship), this could have been the result of the councils being more proactive in implementing cumulative impact zones and in adopting other alcohol policies for which the researchers had no data. It could also be that the shift from the selling of alcohol to be consumed on the premises (on sales) to sales for consumption off the premises (off sales) was less pronounced in the areas where cumulative impact zones and more intense scrutiny was in place.

commentary This study concluded that reductions in hospital admissions over the 2009–2015 period were at least partially attributable to two aspects of local licensing policy in England: (1) the creation of cumulative impact zones and (2) the refusal of new licenses. This provides some evidence that local policies to control outlet density may help to mitigate the harmful effects of alcohol on population health. Further research would help to understand the extent to which other policies (including other licensing policies) contributed towards the observed improvements in population health outcomes. The 2011 Police Reform and Social Responsibility Act ensures that local health boards and primary care trusts are consulted on, and have the ability to object to, all licence applications. If this did affect hospital admissions it would be via more applications being refused, so we would expect this to be reflected in the featured analysis. As well as looking at broader ways of enforcing licensing, further research could consider the impact of alcohol licensing policy on wider determinants of health, such as visits to accident and emergency departments, and hospital admissions related to (but not primarily caused by) alcohol consumption.

The relationship between the alcohol policies and reductions in admission rates which were studied could not be deemed cause and effect partly because, as the authors identified, the more active alcohol policies were not introduced randomly, but in areas with greater levels of harm as their starting point. Therefore, selecting high intensity areas could equate to some degree to selecting high harm areas. In areas where there were very high levels of alcohol-related hospital admissions to begin with, the reductions in subsequent years could have been a result of ‘regression to the mean’ – a phenomenon whereby extreme measurements (either very high or very low) tend to move closer to the average the next time they are taken – as opposed to being a reflection of interventions.

A review of UK alcohol policy found that despite some provisions across the UK to enable local control of the availability of alcohol, such as those discussed in the present study, current legislation does not allow for reductions in the numbers of premises by revoking existing licences in the interests of public health. Reforms to Scottish legislation have improved the ability of licensing boards to control outlet density, requiring them to refuse an application for a new licence if this would result in too many of the ‘wrong kind’ of drinking venues in a given area, and to remove the option of new outlets applying for licenses in areas which are already oversaturated.

Alcohol policy is influenced not only by scientific evidence, but by cultural and political values. It continues to divide the opinion of government, industry and health professionals, and as such is implemented in different ways across the UK. Overall, Scotland appears to be leading the way in driving evidence-based policy, underpinned by legislative framing of alcohol as a ‘whole-population issue’, requiring a public health approach to reduce alcohol-related harms by reducing overall consumption, not matched in the 2003 UK Government Licensing Act.

Thanks for their comments on this entry in draft to Dr. Frank de Vocht of the University of Bristol. Commentators bear no responsibility for the text including the interpretations and any remaining errors.

REVIEW 2016 A rapid evidence review of the effectiveness and cost-effectiveness of alcohol control policies: an English perspective

STUDY 2011 Achieving positive change in the drinking culture of Wales