This entry is our analysis of a study considered particularly relevant to improving outcomes from drug or alcohol interventions in the UK. The original study was not published by Findings; click Title to order a copy. Free reprints may be available from the authors – click prepared e-mail. The summary conveys the findings and views expressed in the study. Below is a commentary from Drug and Alcohol Findings.

Emergency department physicians regularly treat people who have had an opioid overdose, but they may not be making the most of the opportunity to provide take-home naloxone. Can a prompt in the patients’ electronic health records boost prescribing of this lifesaving ‘overdose antidote’?

Summary Every day more than 115 people in the United States die of an opioid overdose, and patients who survive have a high risk of repeated overdose in the following year. The featured study examined whether an intervention in the emergency department could improve the distribution of the ‘overdose antidote’ naloxone, which if administered in a timely manner at future overdoses could stop them becoming fatal.

The featured study examined whether a prompt in the electronic health records of patients attending emergency departments after an opioid overdose could increase take-home naloxone prescribing.

In total, eight out of nine emergency departments increased their prescribing after the prompts were introduced, while the ninth emergency department, which saw the highest volume of overdose patients and had a pre-existing take-home naloxone programme, did not see any increase.

Naloxone has become the standard of care for the medical treatment of overdoses, and can be administered nasally, into a vein, into muscle, or under the skin. Through take-home naloxone programmes, naloxone has been made available to people likely to witness an opioid overdose, including people who use opioids, friends and family, and workers.

Although the emergency department represents an opportune setting for identifying people who have had an opioid overdose and then distributing naloxone to them as part of a harm reduction strategy, the practice is uncommon. For example, a survey of emergency department physicians in the US found that only 2% were prescribing take-home naloxone. As with other interventions seen as supplements to a person’s role rather than their core work, barriers to prescribing may include a lack of time, knowledge, training, and institutional support. Clinical decision-making and practice may also be informed by conscious or unconscious bias – deeply engrained stereotypes or beliefs about groups of people (1 2 3 4 5). 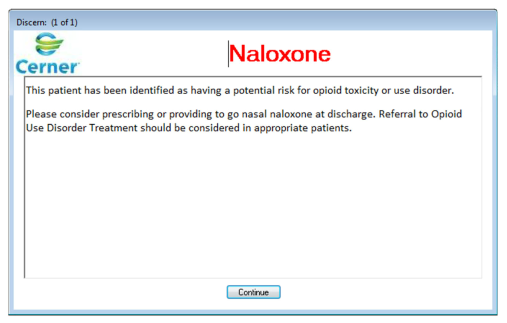 see image) in patients’ electronic records during the physician-led discharge process. The decision to prescribe was ultimately left up to the physician.

The analysis included the records of patients (18 years and above) attending nine emergency departments. Patients who died or who were admitted to the hospital for further treatment were excluded.

The overall rate of prescribing increased from 201 out of 2,059 overdose patients in the 11-month period before the intervention, to 190 out of 1,433 in the 11-month period after the intervention. This change from 10% to 13% did not reach the level of statistical significance. There was also no significant immediate effect in the month take-home naloxone prompts were introduced. However, there was a statistically significant downward trend in prescribing before the advent of electronic prompts, and a statistically significant upward trend in prescribing thereafter, suggesting that the electronic prompts were associated with a sustained effect on take-home naloxone prescribing. The rate of prescribing decreased by 1% each month (from a starting point of 16%) in the 11 months before the introduction of the prompts, and then subsequently increased by 3% each month (

chart). This increase in take-home naloxone prescribing closely mirrored the increase in the frequency of prompts for most emergency departments. 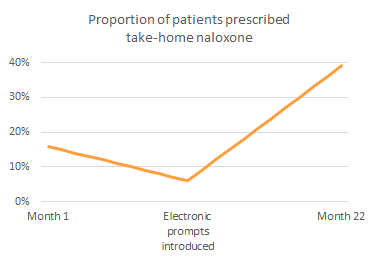 According to further analyses the electronic prompts may help to address disparities in the provision of take-home naloxone along the lines of race and age, which could suggest that implicit bias in clinicians can be corrected with external prompting. These findings are consistent with previous findings that an electronic alert can promote previously under-used harm reduction interventions in marginalised populations.

Although this was the first study to examine the use of electronic prompts for take-home naloxone prescribing, they have been tested in other harm reduction and medical scenarios. For example, a similar electronic prompt was associated with increase in the rate of hepatitis A vaccinations in the emergency department among high-risk patients during a regional outbreak.

commentary Electronic prompts were associated with an overall increase in the provision of take-home naloxone kits. As the increase did not rise to the level of statistical significance, the study could not rule out a chance increase as opposed to one associated with the intervention. However, adding weight to the hypothesis of a link between reminders and increased prescribing was evidence of a reversal of a downward trend in prescribing after electronic prompts were introduced. Prescribing was decreasing by 1% each month in the 11-month period prior to electronic prompts being introduced and then subsequently started to increase by 3% each month (

Reminders have been used in other contexts to varying degrees of success. Perhaps one of the largest bodies of evidence comes from the US Veterans Affairs or ‘VA’ health care system for ex-military personnel, which made a determined effort to implement routine brief alcohol counselling in its primary care clinics. At one clinic advice to risky drinkers only followed a reminder in 15% of cases, and just 6% of those patients were offered brief counselling. Clinicians gravitated towards advising abstinence to a few very heavy drinkers – not the public health role envisaged for brief interventions. In other clinics, the reminder seemed to become routine, and advice to risky drinkers followed a reminder in 71% of cases.

As discussed in the Alcohol Treatment Matrix, these studies serve as an illustration of the difference organisational context can make. In the first clinic there were no active implementation efforts, little leadership encouragement to use reminders of any kind, no culture of routinely responding to clinical reminders, and no incentives for their use or for brief alcohol interventions. Contrast this with the other clinics where the culture was that reminders were to be responded to and their use was routine.

The design of the study did not permit a follow-up with patients about their use or non-use of naloxone, attitudes towards naloxone, or thoughts on being prescribed naloxone in the emergency department after an overdose. Furthermore, it could not collect data about how many patients were offered naloxone but declined; based on other research, a considerable proportion (38%) of patients offered naloxone may have in fact said ‘no’.

Another limitation of the featured study was the lack of a control group, which would have given the researchers a mechanism for comparing levels of prescribing between different sites with the primary difference being the presence or absence of electronic prompts. The design did feature a proxy control group of sorts – the 11-month time period in all settings prior to the introduction of electronic prompts, which was compared with the 11-month period after their introduction. This design renders it more difficult to conclude that the intervention caused the observed increase, because other factors may have been at play during the two time periods that contributed to the different levels of prescribing. For instance, all of the emergency departments were in a single healthcare system in the same state in the United States, and were potentially all subject to similar changes or continuity in the rate of overdose, overdose awareness, and availability of interventions to prevent (fatal) overdoses. However, findings supporting the specific contribution of electronic prompts included:
• a considerable (if non-significant) increase in overall prescribing, which seemed to be limited to emergency departments with little to no prior commitment to distributing take-home naloxone;
• evidence of a statistically significant downward trend in prescribing, followed by a statistically significant upward trend in prescribing that coincided with the introduction of electronic prompts.

Take-home naloxone in the UK

In 2005 naloxone became the new hope for harm reduction after UK law was amended to permit emergency administration by any member of the public. Its legal approval was seen as an important step to widening availability – meaning that GPs could prescribe naloxone kits to suitably trained drug users, friends and families. Scotland lifted these restrictions further, allowing emergency-use naloxone to be provided to services without prescription, enabling drug treatment and homeless hostel staff to have the drug ready for use. National naloxone programmes have been in place in Wales and Scotland since 2011, but in the name of localism, England has so far not established a centrally driven national programme.

As of 2019, the nasal spray format was being trialled in a pioneering way by police officers in West Midlands Police, providing a potential model for other police forces and professionals who come into contact with people who inject in public places.

The UK’s first naloxone peer training and supply programme was launched in Scotland, where it is hoped that “volunteers will contribute to increasing the availability of naloxone within the community so that it is more likely to be present when an overdose occurs”.

STUDY 2018 The impact of buprenorphine and methadone on mortality: a primary care cohort study in the United Kingdom

STUDY 2019 One opioid user saving another: the first study of an opioid overdose-reversal and naloxone distribution program addressing hard-to-reach drug scenes in Denmark

STUDY 2012 The impact of take-home naloxone distribution and training on opiate overdose knowledge and response: an evaluation of the THN Project in Wales